Back around 1999 when I first had this idea of covering "Rock and Wrestling" I started putting together images that were similar between the two. The first image is one such example with a rare photo of Jimmy "Mouth of the South" Hart in a 1982 Ozzy t-shirt (from the "Speak of the Devil" tour, no less). Plus Japanese & WCW star Akira Hokotu with a hairstyle that looks a LOT like "The Hunter"-era Debbie Harry. 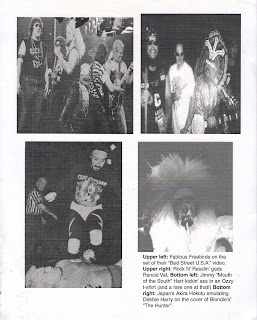 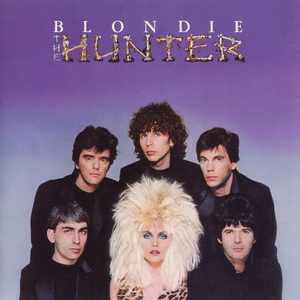 Next we have a flyer I made for a late-90's DIY punk show in Menlo Park, CA with a couple of my friends bands (namely Slobber, On Mars & Anti-Core. This show was at a short-lived feminist bookstore in Menlo Park. The store was run by two women who were the "small business tyrant bosses" of my friend Brooke (bassist / backing vocalist of On Mars). This is NOT because they were feminist rather they just didn't believe in Brooke's commitment to the movement and would often scold her for not knowing certain authors, etc.  Anyway, the store was a bit behind El Camino near Stanford and uh...the Arby's I guess. The show was fun but the time Anti-Core played it got REALLY rowdy which was maybe a mix of people bringing in wildly spraying 40-ozers, some weed and occasionally knocking stuff off shelves along with cans and bottles along the floor. Moreso, it might've gotten a bad rap just from there being some wild Redwood City power-violence scene dudes there. I mean they were usually fun to have at shows but the authorities aka: Brooke's bosses eventually found out about the gig and threatened to call the cops about 2 songs into Slobber's set and I don't even think On Mars got to play. 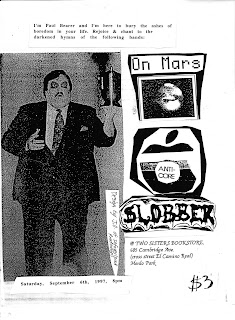 I also did some non-wrestling flyers earlier a few months before which promoted shows a few of my Redwood City friends (namely Mike from Slobber and Mike Redwood who was later drummer of Redwood City bands Hammer Horror Classics, and Whores of War plus singer of S.H.A.T. More recently he's fronting Portland sludgeoids, Fallow). Mike R'wood was also someone who I went to every Slobber show and a couple of Spazz shows with and a really funny and cool dude. At this time I had a shitty ad sales job for a local publication in Palo Alto (which shall remind nameless). So, like the good fellas at Street Fight Radio would say, it was high time for time theft and so I spent a bunch of time on the clock sketching out, copying and pasting punk gig flyers and writing stuff for my 'zines (when I didn't have to take 300 fucking phone calls and do spreadsheets). Although, this flyer with Abdullah the Butcher was done on my lunch break which I now had added ten minutes to as the copy place was a block & 1/2 from my office.

Since this was the Summer of 1997 and the Internet was still pretty new - I had to explain to people who The Madman of The Sudan was. Though, all of the kids really liked it whether they were big wrestling fans or not.  Abdullah I thought was a perfect fit for the chaos of punk and hardcore shows I started seeing then. Namely Poison Idea, Spazz and based on the fact that there was a band called Godstomper on the bill as Abdullah represented in kayfabe-ness - a blood mad warrior from the Sudan* who didn't follow the American way of god, blind consumption and nationalism. Anyway, S.U.C.K. stood for Suburban Underground Conspiracy Kids which was led by Deb - a girl from Palo Alto High School and they coordinated a few shows like this on the Peninsula, Deb also had a punk/hardcore/power-violence show on KZSU on Monday afternoons. Her show was made up of her hosting along with about 10 of her friends. So whenever backannoucing or PSAs came around it often sounded very chaotic as one person would start talking and you could hear maybe 6-7 others rather loud in the background. Though, I guess that was part of the show's charm and moreso that these kids were doing something outside the usual Poser Alto bullshit of sports** and potential grooming for Ivy League and Stanford Business School yuppiedumb.

Deb & the Conspiracy Kids also put out a 7" compilation with more melodic bands***  like Jacob Ham who's singer Sean played with Mike from Slobber in the chaotic "Anarcho-Dada-ist noise" act, Anti-Core. A few years later Sean played in Magic Bullets with Phil of Terry Malts. Plus, Phil was one of the kids back in '97-'98 that would hangout at KZSU during Deb's show.  Granted, I don't even remember what the other bands on this comp sound like aside from maybe melodic and/or poppy punk but wasn't quite the Lookout! Records/East Bay style either. I can tell you though Jacob Ham did a solid cover of The Smiths'  - "Stop Me If You Think You've Heard This One Before". This despite me not being a mark for Johnny Marr & Morris C. 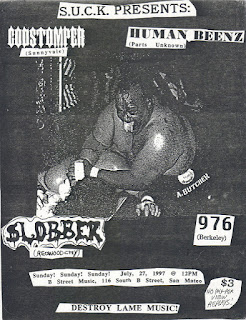 Also, the 976 on this flyer was feuding with another 976 - this one from Redwood City and arguably the TEMPLATE for the mid-late 90's power-violence bands in the City of Climate Best by Government Test. I witness this feud in person the first West Bay punk show I saw in early '97 during a hastily put together show featuring Slobber, Misanthropists, Happy Hour, Model American and The Janitors (which might've been Janitors Against Apartheid but I didn't catch that part of the name) and you'll see more from my old zine Marketing Ploy (Vol. II/ No. 1, Sept. 1997). Admittedly, I dunno if that summary of 976 West Bay vs. 976 East Bay (who I can't find any info on save my old zine) was entirely accurate as previously to that night I hadn't even heard of 976 West Bay minus some random sticker I once saw in Palo Alto. Said sticker had a copied image of a lady from a late-night adult phone line whose prefix was 976 which was hella common circa: the GHW Bush/Dan Quayle years.  their band name and "Anyway, the West Bay 976's discography CD I eventually reviewed for KZSU many years later and it was a total ripper!  Oh yeah - my zine's page starts with the tail end of my review of a killer show Unsane/Kiss It Goodbye show in San Jose from a few weeks before. 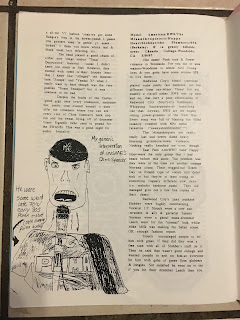 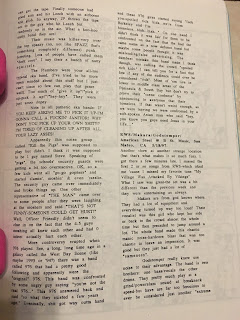 HOLY SHIT! STOP THE SHOOTING STAR PRESSES! I just found THIS video of 976 with a pic ABDULLAH THE FUCKING BUTCHER vs. THE ORIGINAL SHEIK on the cover!!!
PRAISE THE ROCK n' WRESTLING GODS!

Lastly, I can't forget about Spazz's contribution to the punk n' power-violence n' wrestling connection. For starters their now classic "La Revancha" album features a AAA-era Konnan on the cover. Plus, the opening song is about Pinche Peach from Brujeria fighting in the Cow Palace and some references to "Macho Man" Randy Savage and (I think) Zach de la Rocha.

Plus, the back cover of Spazz's split 7" with Monster X had an image of a straight-edge luchador who's name I'm not sure of but it kinda looks like a very swole Rey Mysterio Jr. or maybe it's his dad Rey Sr.?

* OK, technically Montreal. [Very Samuel L. Jackson voice] Kayfabe! Do you speak it motherfucker?!?
** Yeah I watch & follow some sports that aren't pro wrestling but doing sports in high school can really suck, no pun intended.
*** This wasn't anything like Agents of Satan or Devonte Hynes either.