Ohh yeeaaaah! Another 'lil tribute to the man of macho-ness. I also found out here that there was a punk band called Ivan and the Terribles (great name!) who had a song called "Intergalgatic Hit List" which was inspired by this Randy Savage promo.  Now peep this moment of quark, strangeness and charm. Take it away Mean Gene...

OK, not Hawkwind per se, but the very Hawkwind-influenced band F/i who have a song called "Stop At the Left" on their live album. Here's another number of these that you should mix with the above promo.

Let's give a big "Ohhhh yeaaaahhh!" to the man & his work. 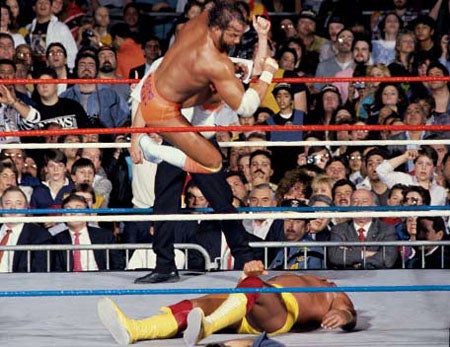 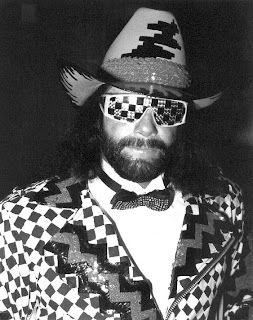 If you've heard the news as of this morning there will be no more be-fringed elbow drops off the top rope and slim jim will only be snapped into by the man who said it first.

Unfortunately, I never got to see Randy "Macho Man" Savage at any of the live matches I've been to. However, he left a hell of a legacy in the wild world of wrestling. Having just finished Chris Jericho's book Undisputed: How to Become the World Champion in 1,372 Easy Steps  I had gone over the very sad chapter that deals with the early deaths of Jerhico's friends namely Eddie Gurrero and Chris Kanyon along with his mixed feelings on the Chris Benoit tragedy. Then reading today news and getting confirmation's from friends just the house lights around the 'ol Squared Circle Pit darker.

Randy Savage aka: Randy Poffo first got into sports with a 3 year stint in minor league baseball in both the St. Louis Cardinals and the Cincinatti Reds farm system. The latter team's farm system also at time had a guy named Steve Duren aka: Blackie Lawless. (Who's uncle Ryne played from 1954-65 in on various big league teams). No truth to the rumor that Fidel Castro was also in the Reds farm system. But, I still want to see a video game where I can play The REAL Red Menace team with Fidel, Blackie and Randy in the starting line up.

Speaking of all things W.A.S.P. & "Macho Man", I often thought it would've been great if Savage came out to the ring in this tune. "Don't tread on me-'cause I'm living to be S-S-Savage!" is perfect for a highlight reel of a top rope forearm smash.

Getting back to specifics, Randy Savage got his in-ring start down in Georgia and Florida and started off going against Paul Christy (who would start the Kentucky-based IWC which we'll get into soon) and teamed with the Anderson Brothers -  Ole and Gene. Up in Kentucky Savage teamed with Rip Rogers and went after the Mexican Angel the latter of who he lays down a very un-PC promo on.

In Memphis, Savage was managed by Angelo Poffo and he immediately made an impact by challenging their champion and fan favorite, Jerry "The King" Lawler.


Going back to the Rock N' Roll connection, here we have some Memphis (and I think IWC) highlights of Savage mixed with a ripper of a Metal tune by The Rods. This is presented by L.A. based-wrestling promoter/b-movie/rockabilly musician, Johnny Legend. Nerd note: I got to meet Mr. Legend at a showing of the Andy Kaufman-"Classy" Freddy Blassie docu, "My Breakfast with Blassie". Totally nice guy who had lots of interesting Andy Kaufman  stories.


As the angle against Lawler continued, Savage teamed with the always crazy, 100% kayfabe David "Dr. D." Schultz who had an Electric Eel/Sex Pistols penchant for using swastikas tees, , and slapping nosey reporters and basically acting like a pro wrestling version of Billy Milano.


The intensity continued with his 1984 feud with another fan fave, "Dirty" Dutch Mantell.


Following his run in Memphis, Savage also did some work in Puerto Rico's WWC going against top foes such as Carlos Colon and Invader #3. Then on July 9th 1985, Savage debuted for the WWF against jobber "Quick Draw" Rick McGraw. Savage was touted as "Pro Wrestling's Number #1 Free Agent" thereby leading to mystery manager angle which led of course to the debut of Miss Elizabeth - who Savage knew from his ICW days. Savage continued continued the flashy color aesthics started by "Superstar" Billy Graham. And pushed it up further with crazy sunglasses and striped patterns. This also helped wrestle-nerds like me finally see grapplers we only read about in the Bill Apter mags.  The WWF era of Savage led to a mutliple championships including 2 runs as World Heavyweight Champion, one King of The Ring, a famous Intercontinental Championship and of course his catch phrase "Oh yeaaah" along with a bevvy of intensely voiced-promos.

His World Championship Wrestling (WCW) career included him working again with Miss Elizabeth in the heel stable New World Order led by former WWFers Scott Hall and Kevin Nash. He was WCW World Heavyweight Champion four times. He feuded with Sid Vicious, Ric Flair, and Chump Hogan. Eventually he did a short stint in the mostly made-of-ex-WCW-guys, fed called Total Non-Stop Action then retiring in 2004. Unlike Hogan, Savage worked far more of the territory systems alphabet soup of the previously mentioned ICW, WWC, WCW and WWF - he also worked in AWA Southern, GPW, CCW, and USWA However, he never worked in Japan which is untypical of a wrestler of his notierity and skill.

His post-wrestling career included making a hip-hop record in 2003 (yes, really! and probably better than John Cena's), acting in everything from Spider-Man to the Weird Al Show to Walker, Texas Ranger. He even received the Harvard Lampoon's "Man of the Year" award in 1998 for his work on the Slim Jim ads. Additionally, he worked on 8 different animated TV shows including King of the Hill, Space Ghost: Coast to Coast, Family Guy and Dexter's Labratory.