All I'm gonna say about this

"It's professional wrestling with ties" - comedian Dana Gould on political debate in the U.S.

Whereas the squared circle shows much more civility.

Posted by Justin "Thunder" Lager at 1:55 AM 0 comments

Not the Prince of Darkness

Sure his name is fairly common & his likeness comes up in a few instances but I'm still imaging every article to be about a Boston-accented, spark-plug bodied mystical speaking guy in proto-corpse paint. Not mine but one can dream.

It came from the the badlands of Texas in 1989. The Texas Hangmen were said to be the indie promotions answer to the WWF's Demolition (1987-91). The two members of the Hangmen were Killer & Psycho. Or in their non-kayfabe names: Mike Moran and Rick Ganter (later Bull Payne in WCW). The Hangmen were in the AWA in its latter days and moved onto USWA bringing with them this incredible traditional heavy metal song (albeit with late 80's/early 90's VHS noise but think of it like an underground metal demo/rehearsal as this video is also as rare & obscure. Or just imagine it as a Merzbow re-mix). Part of their theme song can heard in the AWA footage below (@ 00:02) along with medicore announcing from future "WCW Nitro Road Reporter", Lee Marshall & head honcho Verne Gagne.

It's seems likely that AWA hired some local musicians to record this tune but the band's identity remains more unknown than these two masked men in the ring. The song has a great shouted, almost death metal-like chorus that could easily have overlapped into their promos. Along with this there's a steady riffs and more commanding vocals that sound quite original and not like one of those royality-free rip-offs we had in the late 90's. The bass is balance and clear and the drumming's on top of things (albeit buried in the mix). Regardless of recording quality and level of popularity this is a damn good & PURE HEAVY METAL song from any decade! Hell, Exciter could've had this out in 1988 and it would've been a lot better than this album. I'm not 100% how correct these lyrics are but follow along anyway.


Intro chorus:
"Who will be next to be hanged? (repeat x8)

Verse 1:
The Texas men are at it again
The mat's turned to a pool of blood red
you can't win, you can't compete
disqualification - it's your defeat

Verse 2:
Psycho reigns into a frenzy - when he smells the blood on their face (?)
Killer he's a firestream (?) - fills the night with the pain-ful screams (*evil laughs*).

Chorus:
Clothesline - we'll break your neck
The match is on and your body's cracked
Powerslam - will put you out
Havoc & violence is what we're about
DDT - total destruction
you're unconscious you have a concussion
Whirlwind - pray for the end
Against our attack - you can't stand

Verse 3:
No guns, no knives don't you understand?
All they need is those bare hands
Pull a noose around your head
Pull it tight - 'til you are dead
Psycho and Killer rippin' it up
One slam and we can't be topped
and with you I don't care
we are the best - you will lose
and we can't be stopped.

Now that you've heard it -tell your local metal band to record this song NOW!

The Texas Hangmen also worked in Japan's W*ING promotion against the methuselahian Gypsy Joe. as well as a fairly long-ish stint in Puerto Rico's WWC promotion. Here's a punishing cage match with where they take on fan favorites TNT (Savio Vega) & Carlos Colón.


Along with AWA, USWA and WWC, The Texas Hangmen also worked in Chicago's Windy City Pro Wrestling and IWA Japan & Big Japan. They've wrestled together in the occasional indy match in Wisconsin (which I saw on some random lady's myspace page from who knows when). The Hangmen held the tag-team championship 3 times in WWC and once in USWA. More details over at Wrestling Data. The same site also has info on the multiple versions of this gimmick that came later. Dunno if they used the same theme song but I kinda hope so.

as they do in death metal, just ask early 1990's Obituary 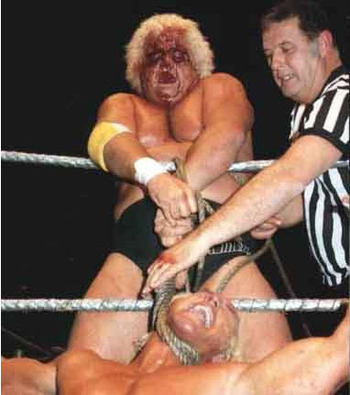 ...or Dusty Rhodes who was also bringing the brutal to Florida a few years earlier.
Posted by Justin "Thunder" Lager at 11:35 PM 0 comments