Punk & Wrestling - One part of many

I'm here to lay down some serious knowledge from the crazy world of Arthur Brown pro wrestling and punk rock. I'm gonna be doing a similar thing for the forthcoming zine outta one of American's top rock n' wrestling cities, Chicago! The zine "No Friends" is  (*Baron von Raschke voice) "from the genius mind from the bands Autonomy, Chinese Telephones and current MRR columnist, Ray Suburbia. So, look for that soon.

ANGRY & WILD
Today I was reminded of the Angry Samoans by some friends who I recently got to know at this year's punk/garage/budget rock showcase, Burger Boogaloo Fest in Oakland. Coincidentally enough, some people at the fest I saw included Johnny Legend who supports the holy trinity of rock, wrestling and B-movies. He was there along with Jello Biafra who himself was once involved during the Bay Area-based Incredibly Strange Wrestling. And jeez, I wish I had taken of photo with them!  So, anyway, I was telling my friends that the Angry Samoans were inspired by wrestling's Wild Samoans, Afa & Sika.  Afa & Sika are from the family with the longest branches in the squared circle the Anoa'i family. In 1984 I saw the Wild Samoans take on the likes of Tag Team Champions Dick Murdoch and Adrian Adonis who were sort of "The Odd Couple" of mid-80's WWF given the NY leatherman look of Adonis and Texas redneck vibe of Murdoch.

BACK TO SAMOA
Getting back to the Samoans —  Kenji Shibuya becomes an investor in the Angry Samoans in the video below. Shibuya was a star in the NWA territories of San Francisco and Los Angeles in the 50s and 60s. According to his stats on Online World of Wrestling he teamed with Mr. Saito aka: Masa Saito who worked in the "big three" AWA/NWA/WWF in the 70's & early 80's. Shibuya is here getting annoyed by the be-mulleted Angry Samoans manger, Sterling Brown by throwing salt in his face. 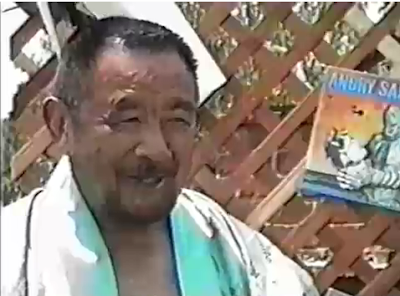 Now the question is who did this FIRST Kenji or Mr. Fuji? Fuji made it (in) famous as he was more in the spotlight during the 1980's and early 90's WWF. And sure, Fuji did inspire a song by Pennslyvania "wrestle-violence" band, The Ultimate Warriors. Yet another wrestling connection with this band is the one member who didn't go onto Pissed Jeans, was none other than vegan, SxE Chikara Wrestling star, Ultramantis Black who often does his t-shirt designs in tribute to Cro-Mags, Gorilla Biscuts, Jawbreaker, The Smiths, Black Flag and even Venom!*


"LOSER LEAVES KRQO" or OTHER GIMMICKS
In 1981 the Samoans uh, as in Angry had garnered some major controversy from their anti-Rodney Binghemimer  song "Get Off The Air" with lyrics like   Rodney was a big tastemaker in the L.A. new wave and punk scene and was host of KROQ-FM's "Rodney on the ROQ" fame. The song lyrics went:

Due to the heat they got from this single and their lack of being booked at local shows, the Angry Samoans became the Queer Pills. Under this new gimmick they recorded a 4-song EP with American punk classics like "Stupid Jerk" and "They Saved Hitler's Cock" - the latter title a variation of the B-Movie "They Saved Hitler's Brain". To further take the piss they called their label "Homophobic Records" and the catalog number as Homo 02. This is odd considering the label never released anything else but again they likely made this  an joke as "Oh Too Homo"? This gimmick only lasted a short time and by 1982 they had recorded their 2nd and arguably their best record, "Back From Samoa" as Angry Samoans. While this album does have another controversial song called "Homosexual" it was more to do with hypocrisy of rich dudes who were secretly gay but presented themselves as an "upstanding straight-arrow". Granted the song does take a jab at Darby Crash in a way but the lines "Homosexual/we love you" and "Homosexual/make it last" sound pretty positive. It seems like the song would be more about Larry Craig and a lot less about out WWE wrestler** Darren Young.

Contrary to rumor the band wasn't homophobic they were however, just a reflection of the time in the punk scene - especially in L.A. where certainly there was a lot of homophobia yet also hypocrisy around it i.e. - see Darby Crash's story. However, they Angry Samoans weren't at all like the jocky dudes that showed up a bit later beating people up at Black Flag and Suicidal Tendencies shows.

Now here's Sheiky Baby calls out that discount Rambo mofo, Corporal Kirschner by callin' him a punk before their match in My-ammee. Is there a band that's sampled this yet? If not, GET ON IT!

* I still need that Venom shirt but every time I look it's sold out. Ugh!  Ultramantis' double DVD is totally worth getting though. Check it out here. http://ultramantis.firstpress.net/order/merch.html
** Yes, I said "wrestler" not "sports entertainer" fuck you WWE marketing weasels!