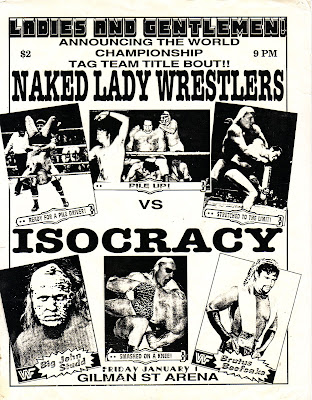 Before writing this, I didn't know a whole lot about this Naked Lady Wrestlers aside from the above flyer my old roommate and wrestling fan, Michael had. (He & I use to watch ECW on Friday nights and marvel at Joel Gertner's "not family friendly" mic work). Through more searching I found a trove from a 1984 live clip that shows them getting great heat from the crowd and the card headliners, Dead Kennedys. Their mix of punk mixed with wrestling influenced banter makes for an unforgettable band. Plus Max Volume's a helluva guitarist who easily could've played in a metal band. I wonder what would've happened if these guys ever played with Rancid Vat in the Cosmic Commander era?

NLW's entire recorded output is pretty sparse. This includes a Thrasher magazine flexi "Accidents" and their great track "Dan With The Mellow Hair" on the "Not So Quiet on the Western Front" compilation (1982). This track starts with a promo that sounds right out of Memphis from the same year as it calls out a certain "Wahoo Biafra" who's apparently "hiding out in Walnut Creek". This mixing of Wahoo McDaniel  name and the fact (or rumor?!?) that Jello Biafra lived in Walnut Creek in the early 80's is pure genius every time. The song snapmares your ears through the best of punk and surf. Then they bookend the song with another promo that tells the crowd "NO APPLAUSE!...We know we present (the) quality music and we don't give a shit WHO likes it, DOESN'T LIKE IT...JUST THAT ALL YOU PEOPLE ARE GONNA HEAR THE MUSIC THAT I DEEM NECESSARY!"


Their Myspace page lists their influences as The Masked Superstar and Buck Robley. The latter of whom came up with one of the greatest short-lived gimmicks ever. The band member names are a pastiche of grappler names from the ages:

Also,  their take on the "William Tell Overture" appears on Killed By Death #13 (1993) and their great, speedy number "Accidents" on Killed by Seven Inch (1996) both from Hell, Norway's finest punk record label Redrum. Said label's origins have  have been kept rather kayfabe amongst collectors. NLWs' myspace has audio for another song that seems to not appear anywhere else, the dirgey, punk-psych tune "Chinese People on Acid" and the super-quick, diss on Swedes (Swede-diss?) "Oly Sven". I found the band as of  2 years ago were playing a few gigs. Most recently at 924 Gilman on March 20th, 2010 along with another local group of wrestle-rockers, Count Dante & The Black Dragon Fighting Society. More on those guys in a future post.